We interviewed Gennadiy Verba, President at Atlas LTA Advanced Technology, about the ATLANT and the future of sustainable aviation through airships. Gennadiy has an expertise of more than 30 years in design, development and operation of airships and aerostats.

How did you get into airships?
I started in Western Ukraine when I was very young by getting to know a group of people interested in airships. I started learning, collecting old books on airships. I had very good teachers from Kiev who were airship enthusiasts. They gave us some basic knowledge regarding airships.

It was in the late 70’s when I started and then in the 80’s I went to university and we created a kind of engineering centre that was one of the first commercial enterprises in the Soviet Union at that time – a company called Aeros, which I founded with a partner. At the beginning of the 90’s we decided to move our activities to the United States and created World Wide Aeros.

Six years later, in 2000, I started my own business in Russia and started successfully building airships and aerostats. We had a lot of experience operating them and we started to work on a new concept of airships, similar to ATLANT, based on our knowledge and experience of building conventional blimps. In 2015, we decided to move Atlas LTA to Israel and started developing airships and electric propulsion systems for airships.

What is Atlas’ mission and vision?
We call ourselves a ‘lighter-than-air’ company. We have experience; we have talented professionals from this industry and we’re focused on aerostats, high altitude platforms, conventional blimps and an innovative concept known as ATLANT. All those areas have one common point: lighter-than-air technology.

We have already started the development of new modifications to our existing conventional blimps. It’s called Atlas 11 and it’s a hybrid electric airship. We hope it will fly very soon and it will be one of the first electric aircrafts of that size. It would be used mainly for tourism and sightseeing purposes, a first in Israel. Then, ATLANT, which has a propulsion system similar to Atlas 11 but scaled up in size.

What makes the ATLANT different to other airship developments in the industry?
The ATLANT propulsion system is a special shape which is good for horizontal flight and for ground landing. In the recent history of airships, all the problems were connected to ground storage because they were lighter-than-air which was an advantage during their flights but not for landing or ground storage.

We’re trying to solve this problem of controlling buoyancy with vertical propulsion to make contemporary airships practical and usable in very different and extreme weather conditions.

Another special part is the structure and design. ATLANT has a rigid shell covered with hard panels which are important to protect it from severe weather conditions, especially when the airship is on the ground where there is heavy snow or strong wind. ATLANT can be operated without a hangar and this is one of its main advantages. 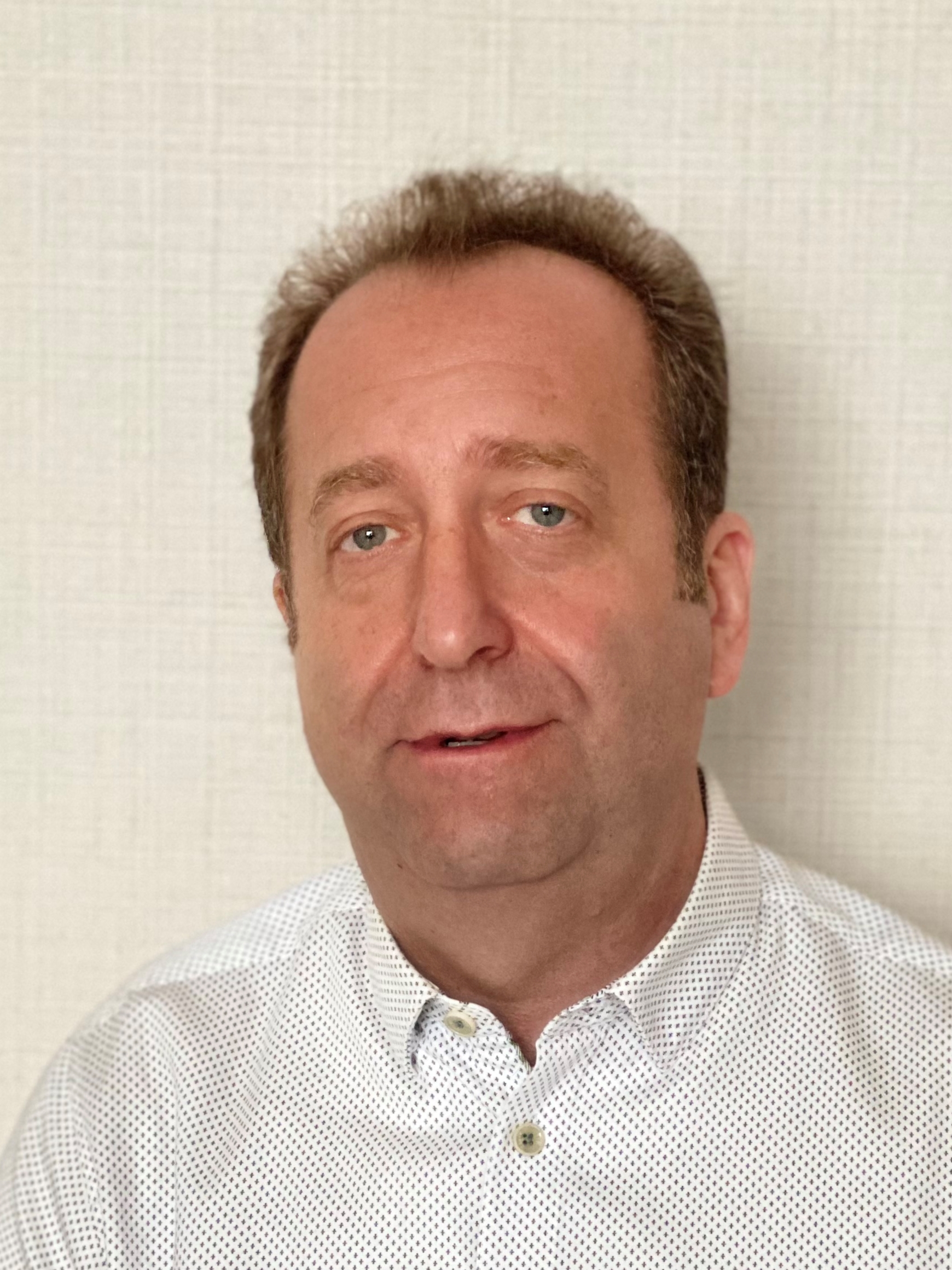 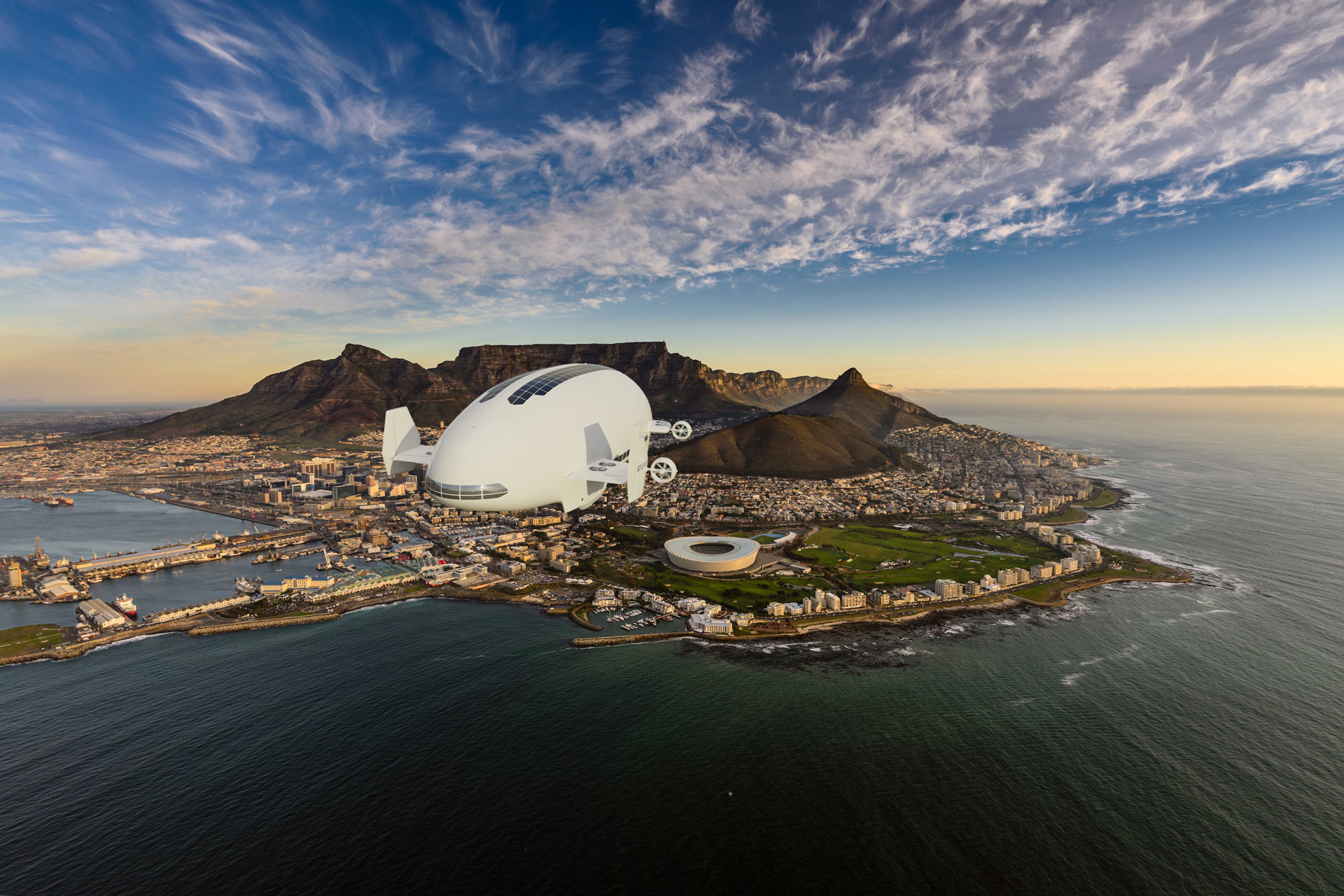 What uses will Atlas airships have?
The first major usage we’re considering is delivering anything anywhere. Atlas is capable of delivering cargo to rural areas that are in the middle of nowhere and this airship can land on any land surface such as land, grass, ice or even water. It has a system with several anchors to attach to the ground where it’s going to land.

The second usage is the capability of moving oversized cargo – very large objects from one point to another in a much more sustainable way than cargo airships, for example.

ATLANT is also perfect for some special missions such as forest fire fighting. ATLANT is capable of controlling buoyancy which is important because it means we have the capability to drop water, become lighter and not go into the stratosphere. It is also suitable for rescue operations because of its ability to land on water or in remote places. And, finally, I can tell you that in the future, when we were sure that ATLANT can operate safely under any conditions, we will also use it for passenger transport and for experiential travel because it is capable not only of flying to distant and remote places but also landing there.

We have plenty of space onboard ATLANT and we can create very spacious cabins and public areas for passengers – like a luxury sea vessel in the sky. We think that the ATLANT cargo version is easier to certify and will likely be built before the passenger version – but it will depend on the market of course and on investor preferences.

In which stage of development is the ATLANT currently and when do you estimate to deliver the first airship?
Right now we’re looking for investors for ATLANT. We already have some minor investors to create this concept, to build a prototype. The next step will be focusing on Atlas 11, which is a conventional blimp but it’s also partially prototyping ATLANT because of the similarities in their propulsion systems. Once we launch this blimp it will be much easier to have new investors in the ATLANT project. The first flight schedule for Atlas 11 is 2 years from now.

“We don’t need any kind of infrastructure, we don’t need to change the landscape. We can contribute to the conservation and to the beauty of places while travelling there without any impact”. 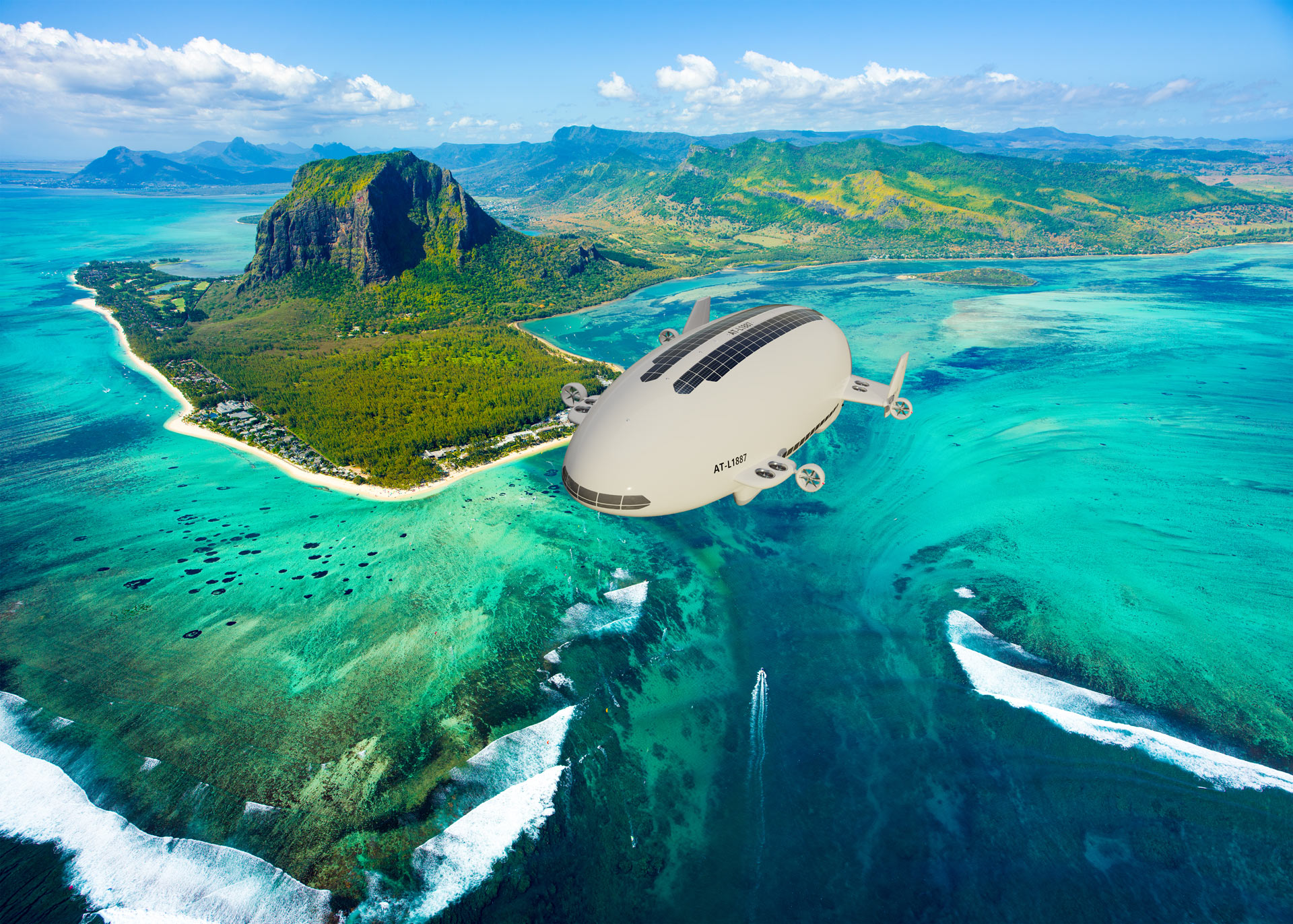 The airship market is yet to be built. When do you think we’ll see airships lightening the skies?
Now there are several manufacturers developing different airships for different uses and this is good news for the future of this industry. I think the first airships will appear and start flying in maybe 3 years from now. We really think that whoever is the first to succeed will ignite the whole industry. It’s very difficult to predict which one will fly first. I could see cargo appearing first because of the advantages of cargo uses are more obvious but on the other hand, the experiential travel business case is very good and maybe it could also be the first one.

What is the importance of design versus technology in this type of air vehicle?
The biggest challenge for airships is safety. To travel to the North Pole is not easy. I have spent some time during my life in some places under the polar circle. The weather changes are very unpredictable and extreme. Your design philosophy should consider the need to be ready for the worst possible weather conditions. This is why we think the airship should be rigid and very well equipped with emergency landing technologies that enable it to land on any surface and in any condition. Otherwise, we’re at risk of repeating the past. Our task is to build airships that are safe and ready to fly and land in all kinds of weather conditions.

What can you tell us about the onboard experience? What will it be like to travel by airship?
As for the onboard experience, we see a lot of possibilities for designers to create unique and comfortable spaces on board. We can afford very large windows that go from floor to ceiling, observation decks, spacious cabins. Since we don’t require a pressurised cabin as in the case of an airplane, it allows us to have more freedom when designing the interiors.

The ATLANT gondola is not attached to the airship, but is inside the airship. It’s going to have three levels and we’ll spread these areas in different parts of the airship. It will have two observation decks on either side of the airship, sleeping cabins on the second floor and, public areas and a restaurant with huge windows on the bottom floor. Different environments with different design and feelings. This kind of approach will make the onboard experience unique and unforgettable but, as I told you, the main thing that should remain above all is always safety. 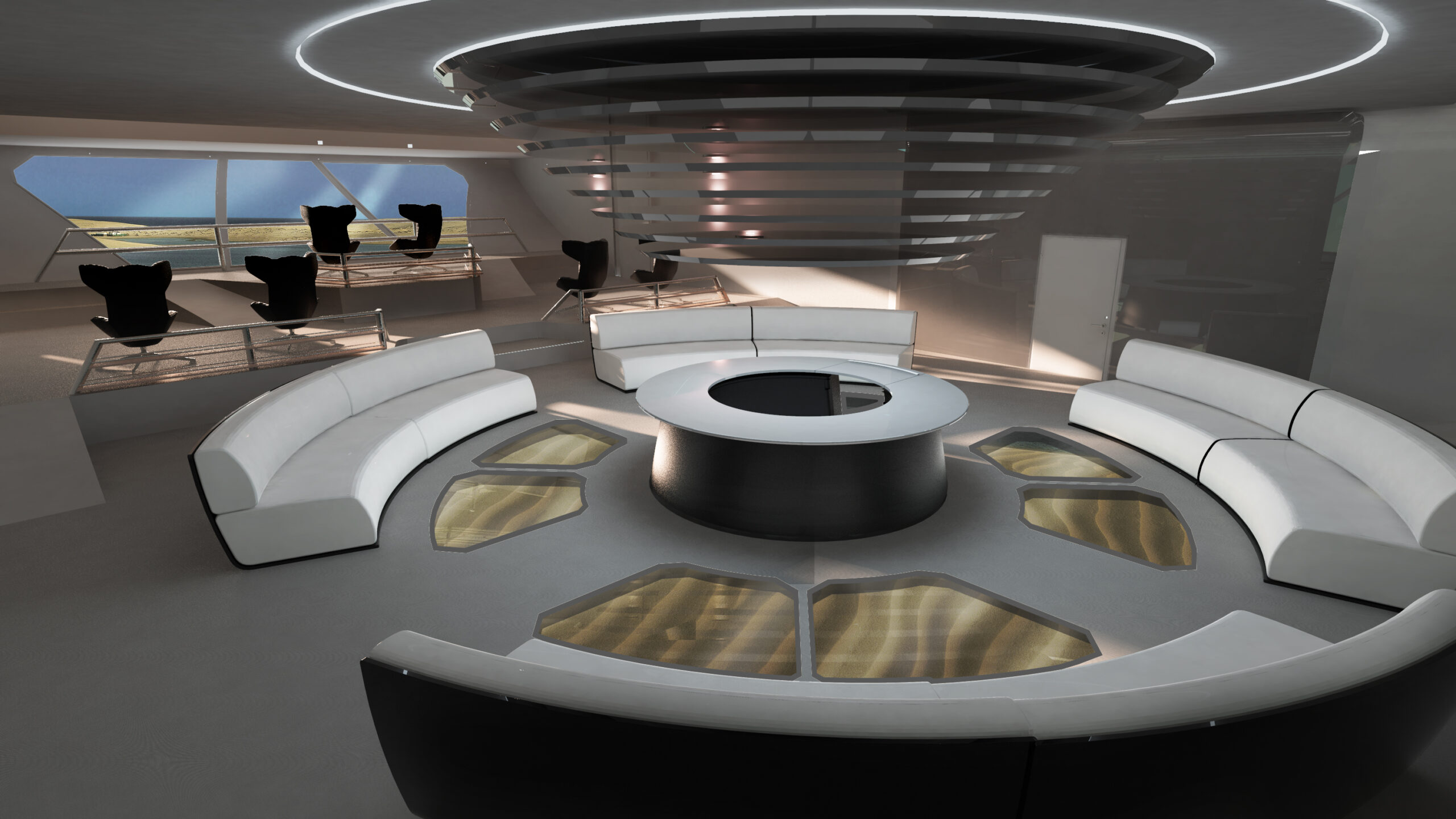 ATLANT’s spacious interior, in a pre-study of interior possibilities by Max Pinucci, Head of Design at OSC Group 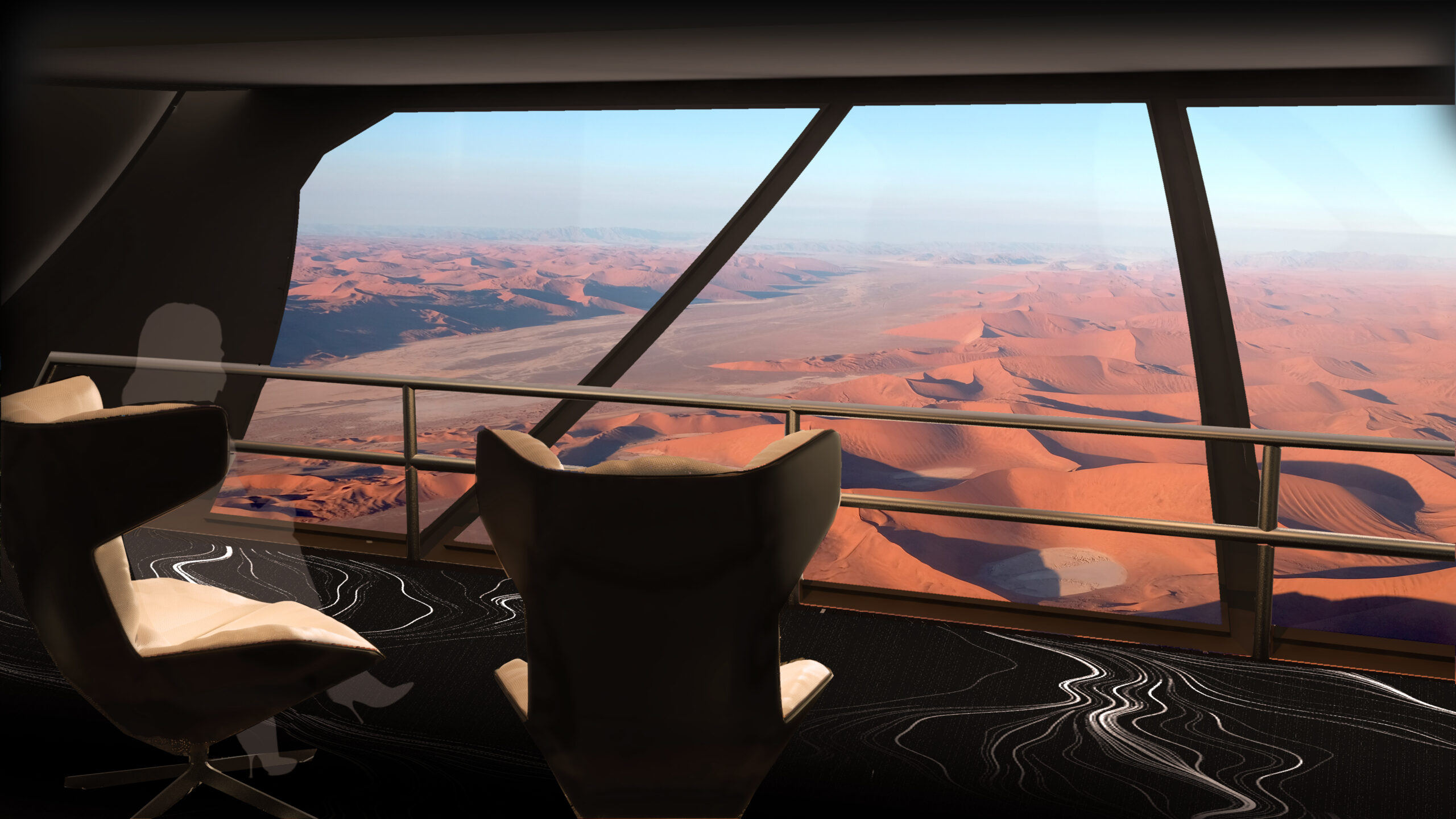 Airships are not pressurised, which makes it possible to enjoy panoramic glass windows and to fly “low and slow” 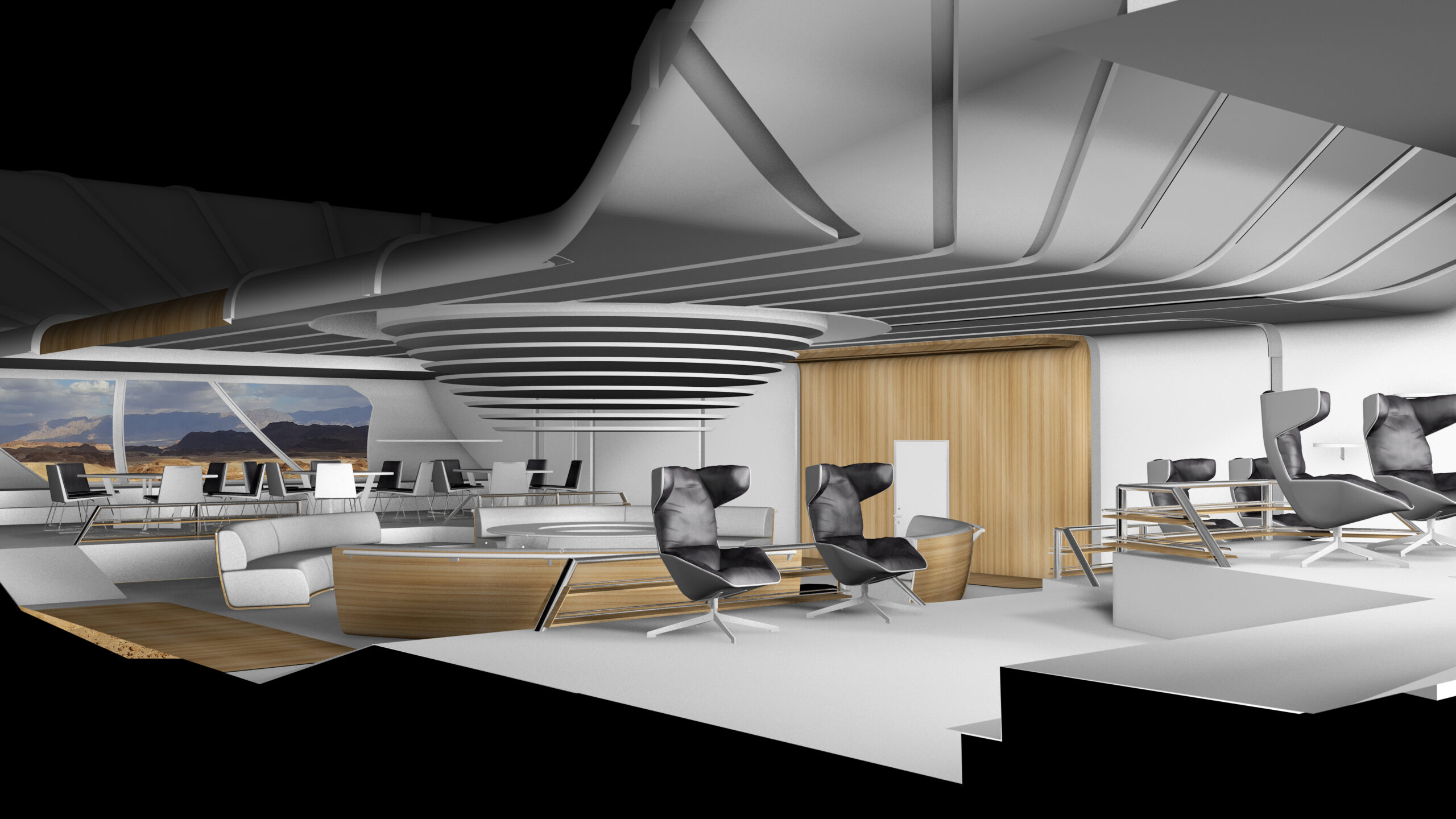 Peace, luxury and comfort on board are the hallmarks of flying in an airship 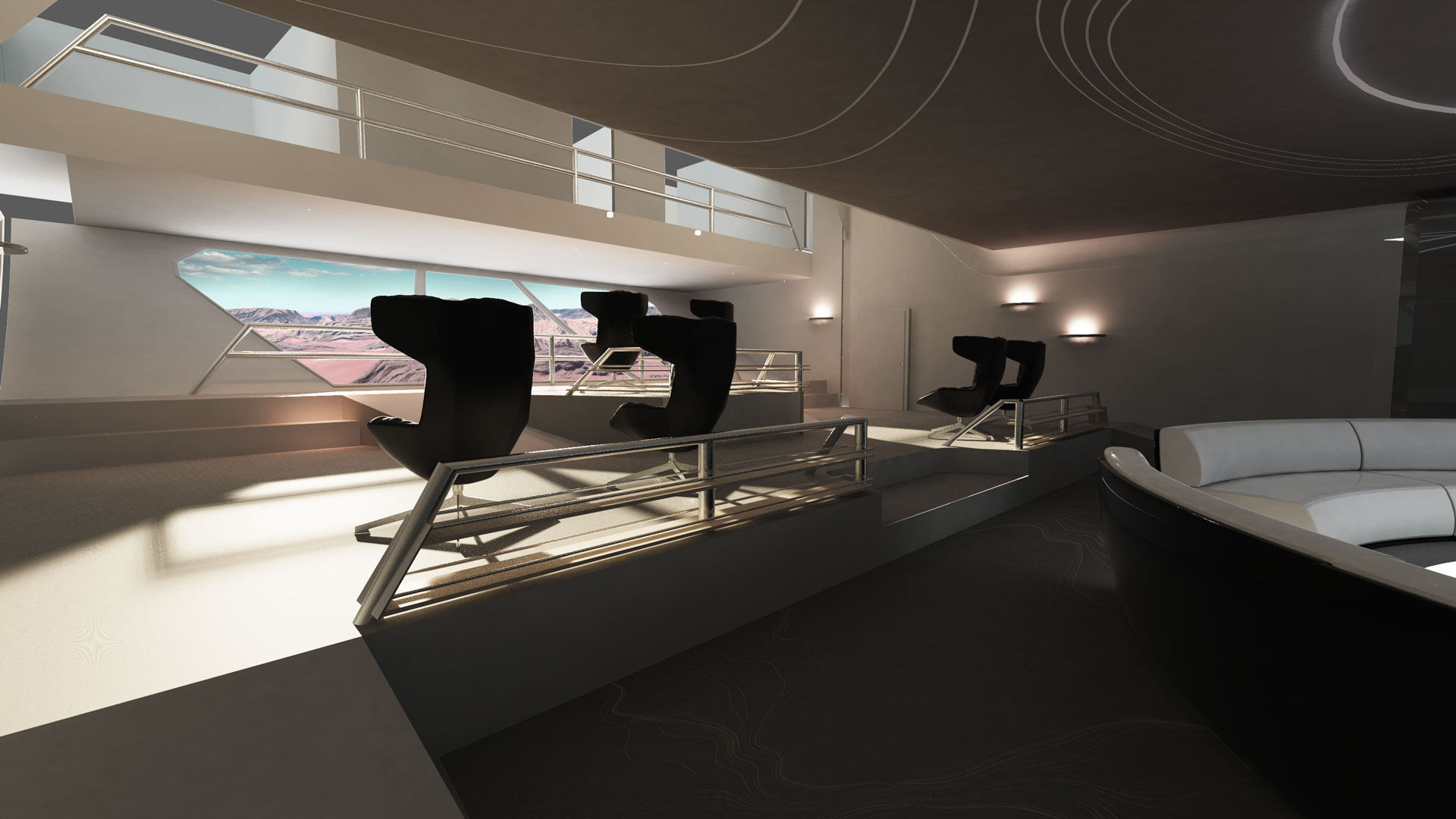 “We have plenty of space onboard ATLANT and we can create very spacious cabins, public areas for passengers – like a luxury sea vessel in the sky”.

If you could choose, where would you first travel aboard the ATLANT?
I think the first trip should be in some areas with a nice climate, not too cold, not to hot, and it’s not because I’m scared about the North Pole but because we should gain the experience with the technology and expand the horizons of airships through some logical steps. Maybe flying first to a remote tropical island and then, in the future, to other places with more challenging conditions such as the Arctic.

What needs to happen for airships to become a real alternative to air transportation?
I believe that every aircraft is built for its use and airships will be better for some uses and airplanes are going to be better for some other uses. We should not be in direct competition in some cases. Planes need infrastructure and airships don’t. To build an airport you’re destroying nature and changing the landscape of nice areas. Though some airships also need some kind of infrastructure such as big hangars or mooring masts. This is one of the main advantages with ATLANT: we don’t need any kind of infrastructure, we don’t need to change the landscape. We can contribute to the conservation and to the beauty of places while travelling there without any impact.

Also, if there will be successful airships in the near future, they are going to be the first large aircraft to use green technologies and then, other kinds of aircraft- heavier than air aircraft, like airplanes, will follow us and will use our experience to implement these green technologies on board. I believe it could also be a key role for airships, to pioneer the sustainable way of air transportation.