The lightness of the journey

By Max Pinucci, Head of Design at OceanSky Cruises

Sitting in a partially reclined airline seat, absently watching of clouds ten kilometres below us through a window the size of a notebook, the magical feeling of flight is something barely noticeable.

Check-in, waiting rooms, boarding queues: everything seems designed to make us forget that we are moving between continents at one thousand kilometres per hour. The flight of large airships was far from this. Elitist, inaccessible to most, it seemed to be the flying transposition of the luxury style of the transatlantic liners of the past, when the experience lay not in the destination but in the journey.

In 1929 the British journalist Lady Grace Marguerite Hay Drummond-Hay, embarked, the only woman aboard die Weltfahrt, for the round the world trip of LZ 127 Graf Zeppelin. Her story is a tale of wonder, accompanied by the humour of a consummate traveller who discovers for the first time the true essence of a luxury adventure. Everything on board is designed for passengers to enjoy the journey, to forget the challenge to elements, to feel welcome and part of the elite.

In contrast with the lounge of the Graf Zeppelin, with its pompous wallpaper with floral motifs, on the Hindenburg the furnishings were the rationalist masterpiece of architect Fritz August Breuhaus de Groot

White-gloved waiters serve à la carte dishes prepared in the electric kitchen. Services and furnishings are impeccably branded, the company logo stands out on porcelain, cutlery, tablecloths and menus. The captain entertains the diners who, after their meals, look out of the large windows enjoying the scenery that flows slowly, two hundred meters below, crossed by the shadow of the leviathan that glides through the sky at 115 kilometres per hour.

In 1931, when the Graf Zeppelin headed to the Arctic Circle on its Polarfahrt, Lady Drummond-Hay was on board again. The flight, which lasted 136 hours over 13,310 kilometres of tundra and ice, was financed through the issue of special stamps and philatelic postmarks.

These cruises were just two of the 590 flights made by the Graf, which totalled 17,177 flying hours, carrying 78,661 kg of cargo in the hold and almost 34,000 people (including 13,110 paying passengers) in its Art Nouveau style cabins and rooms. Even the earliest Zeppelins, such as the LZ 8, were designed to make the experience of flying unique: comfortable chairs, fluted pillars, veneers and inlays of precious nacre hid the frantic quest for a compromise between lightness, functionality and image. 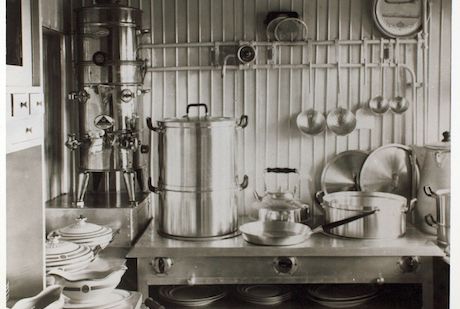 The service on board the Graf Zeppelin was that of a luxury hotel with complete with modern back of house. Photo: San Diego Air and Space Museum 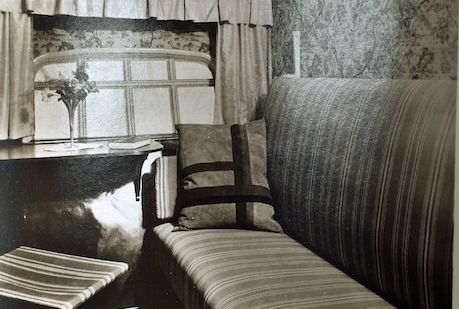 The cabins of the Graf Zeppelin were in Art Nouveau style. Photo: San Diego Air and Space Museum 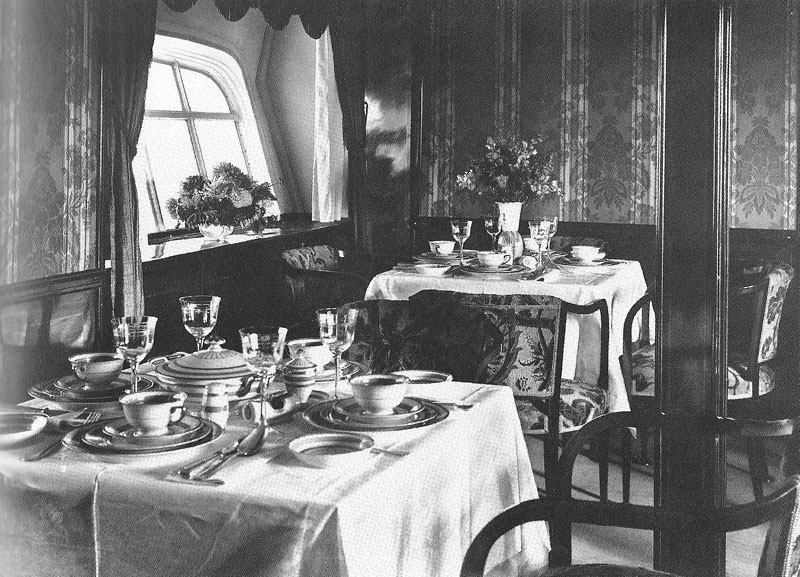 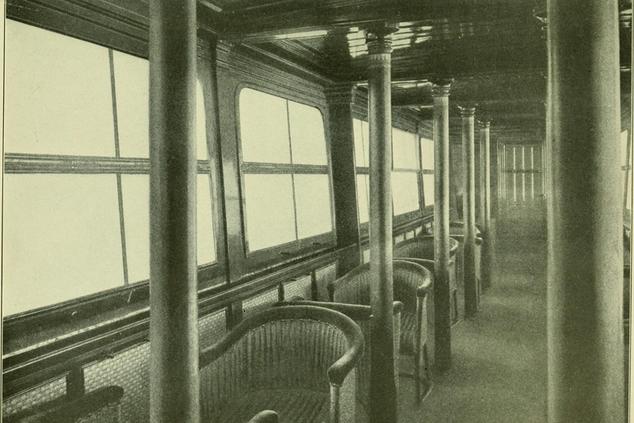 In contrast with the lounge of the Graf Zeppelin, with its pompous wallpaper with floral motifs, on the Hindenburg the furnishings were the rationalist masterpiece of architect Fritz August Breuhaus de Groot. Its curved tube chairs and aluminium piano, built by Julius Blüthner Pianofortefabrik, immortalized in many films, were the pride of the Deutsche Zeppelin-Reederei airline. 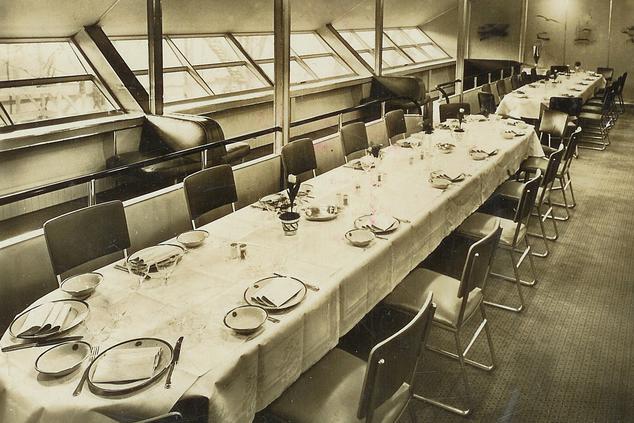 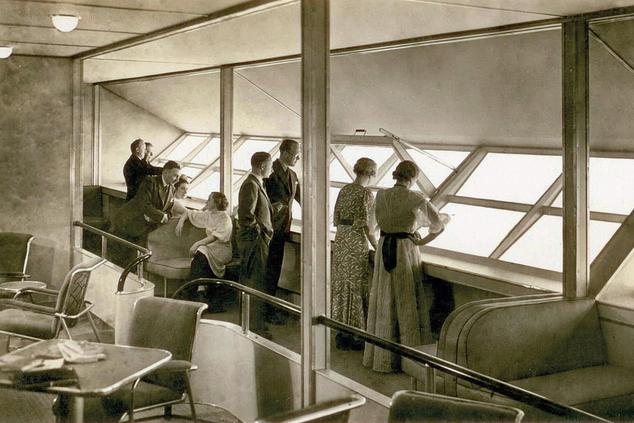 Passengers on board the Hindenburg. Photo: Nationaal Archief

But few remember the interior of the British R100 airship, whose design was supervised by chief engineer Nevil Shute, who had not yet become a novelist, and could host one hundred passengers on two levels, with a ballroom and promenade deck lit by a beautiful arched glass window, ten meters long and three high, or the saloons of its R101 rival, with its white panelling inlaid with gold and Cambridge blue curtains, wicker chairs fitted with air-filled cushions to save weight. 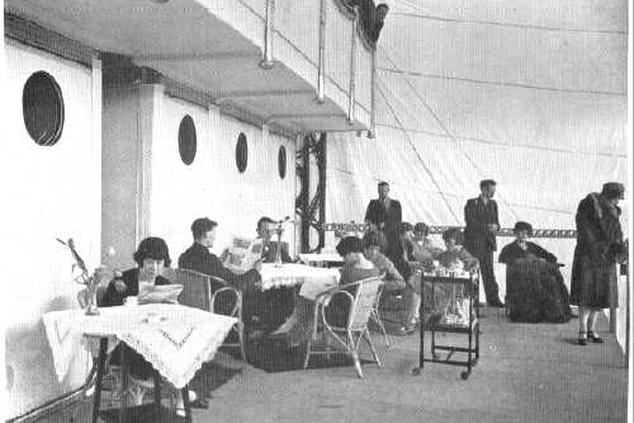 Passengers in the promenade deck of the R100 airship. Photo: Airship Heritage Trust 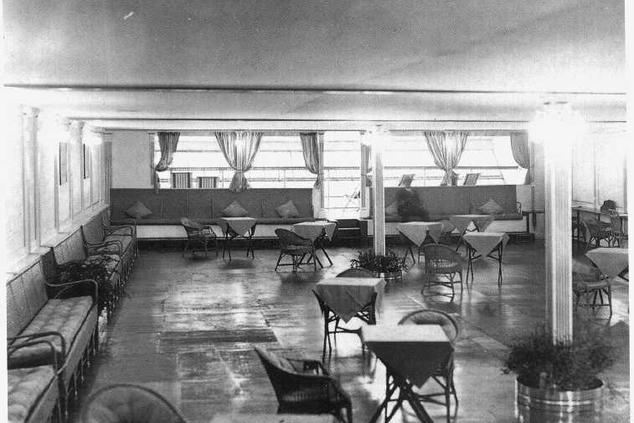 The wide lounge of the R101, the largest airship of her time, before the Hindenburg was built. Photo: Airship Heritage Trust

Crossing the ocean on the Graf or the Hindenburg required 80 hours, lulled by the slight roll of the airship and engine roar. Penetrating smells, loud noises and a spartan precariousness were reserved to the crew, engaged day and night in manoeuvring the airship, in maintaining the engines, in monitoring pressure, often resting in hammocks hanging from keel girders, as in the bowels of a sailing ship of the past. Modernity and tradition lived side by side in the cockpit. The radio-navigation system, autopilot and eco-altimeter coexisted with the wheels of the rudders, nautical compasses and sextants.

Lady Grace wrote in her diary:

“Marines, sailors and Boy Scouts relinquished the ropes which held her to earth.
Up she nosed, and away, a steady-moving monster quickly lost in the darkness.
Manhattan watchers heard her motors, saw her slummer through the murk.
She circled the Statue of Liberty before heading to sea.”

Might we rediscover, someday, such feelings sitting as passengers in the cabin of a Zeppelin NT, Atlant or Airlander?