The N-1 Norge, the first aircraft to fly over the North Pole

By Gregory Alegi | excerpt from the book “Airships, Designed for Greatness the Illustrated History”

The 19,000 cubic meter N-1 was the first airship entirely designed by Umberto Nobile, who initially referred to it as the N 19,000 but soon switched to N-1 (for Nobile 1). Nobile followed the Italian semi-rigid formula, introducing a new cleaner cruciform empennage.

The envelope included 10 gas compartments and there was accommodation for 15 crew, 15 passengers and a cabin attendant. Power was provided by three 245 HP Maybach IV-1 engines. Construction was authorized on 13 April 1923, by when the Stabilimento Costruzioni Aeronautiche (Aeronautical Manufacturing Plant, SCA, which Nobile headed since 1919) had already built the gondola and other parts. The first flight was made on 1 March 1924.

In May 1925 the N-1 flew from Rome to Barcelona, from where it proceeded to Toulouse before returning to Italy. The long and successful flight brought the N-1 to the attention of the Norwegian explorer Roald Amundsen, whose attempt to reach the North Pole with the American magnate Lincoln Ellsworth in Dornier Wal flying boats had just failed. In October 1925, the Royal Aero Club of Norway reached an agreement with the Italian Air Ministry to acquire N-1 (which it christened Norge) for a new Ellsworth-Amundsen Polar flight. 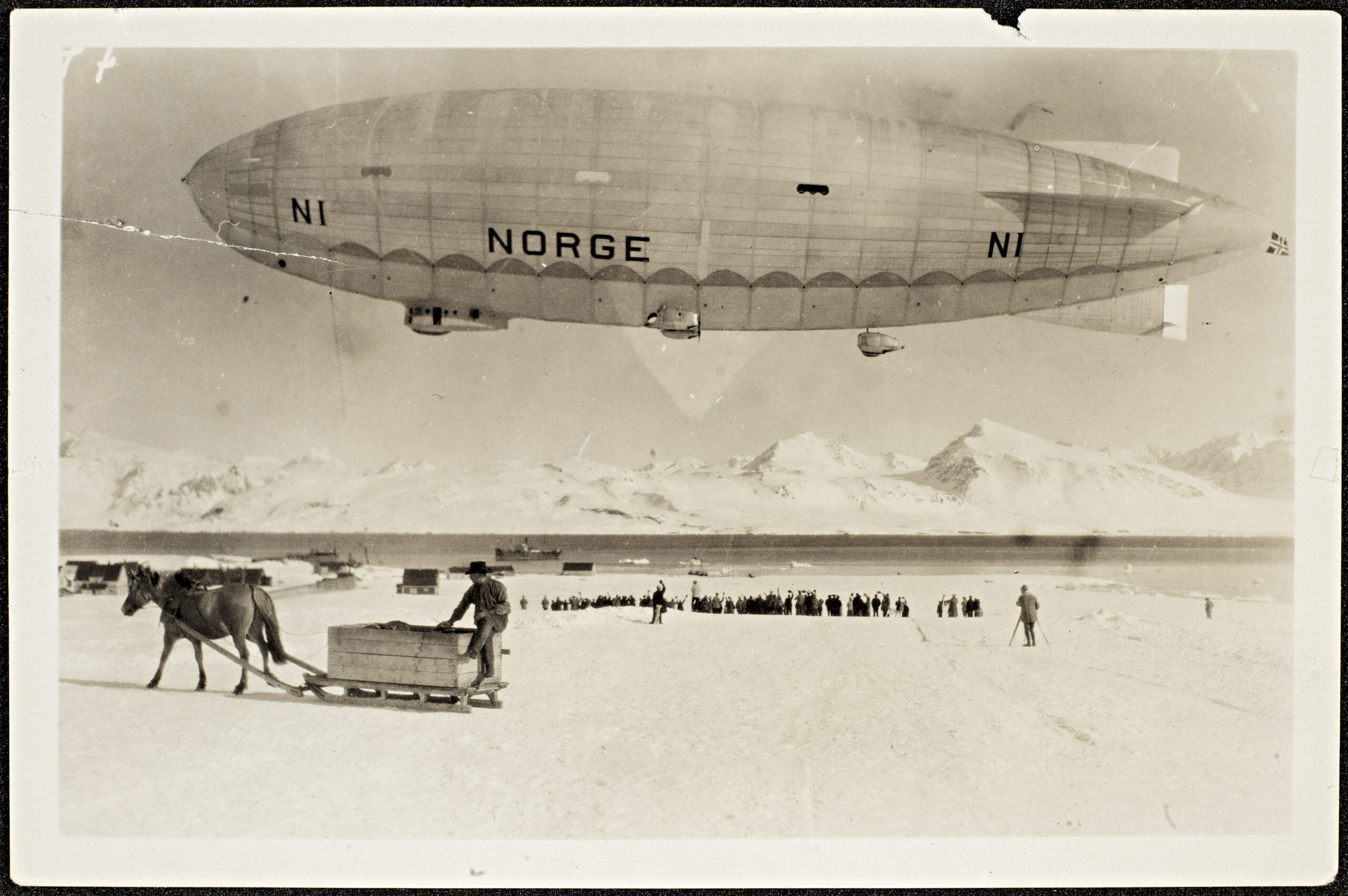 The contract also provided for the services of Nobile and his flight crew. Nobile lightened the N-1 by over two tons, mainly by considerably shortening the gondola, eliminating propeller reverse and, taking advantage of the low operating temperatures, eliminating the radiators.

The airship was reflown on 5 January 1926 under the Italian registration I-SAAN. On 10 April 1926 the Norge departed Ciampino with a crew of 16 (8 Norwegians, 6 Italians, 1 Swede and one American), reaching Gatchina in the USSR on the 15th. After a twenty-day layover, on 5 May Norge left for Vadsø, in Norway (which it reached on 6 May) and Ny-Ålesund, in the Svalbard archipelago (7 May). From here it took off on 11 May, overflying the Pole at 01.30 GMT on 12 May eventually landing at Teller, Alaska, at 07.45 GMT.

The meticulously kept navigation logs confirmed beyond all doubt that the expedition had indeed reached the Pole. The transpolar flight marked the end of the N-1. Nobile, Ellsworth and Amundsen clashed over who should be credited for the success. The airship was scrapped in Teller, with only the gondola, engines and elements of the keel returning to Italy. 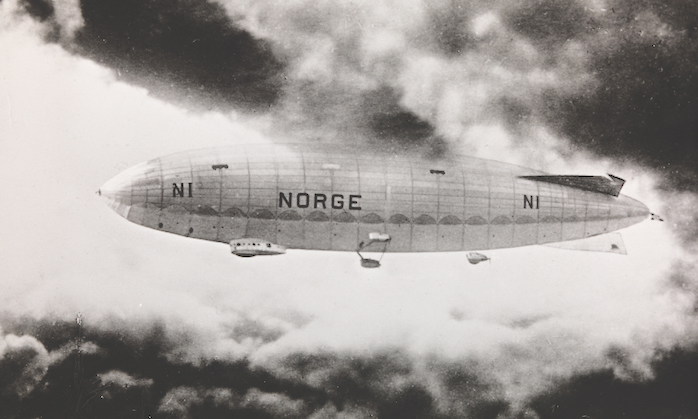 The Norge was the first airship to overfly the North Pole in 1926 Photo: Nasjonalbiblioteket 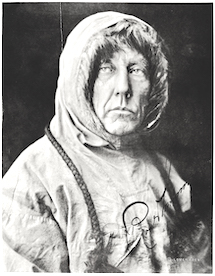 The exhibition “Shadow of Norge” commemorates the 95th Anniversary of Amundsen and Nobile’s North Pole airship overflight with a series of International Webinars and Cultural Encounters that have celebrated this epic exhibition expedition. 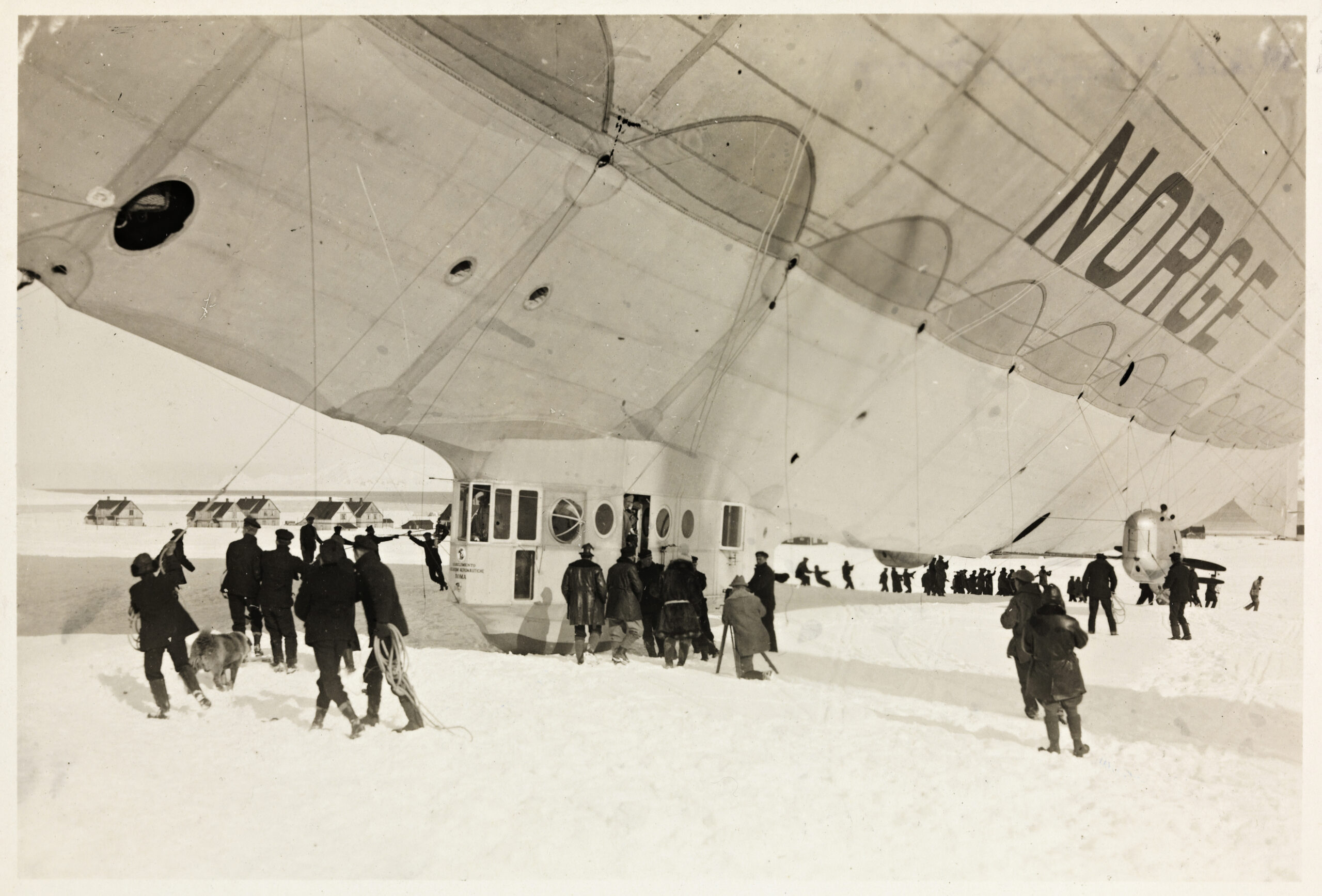 On 5 May Norge left for Vadsø, in Norway and Ny-Ålesund, in the Svalbard archipelago. From here it took off on 11 May, overflying the Pole at 01.30 GMT on 12 May. 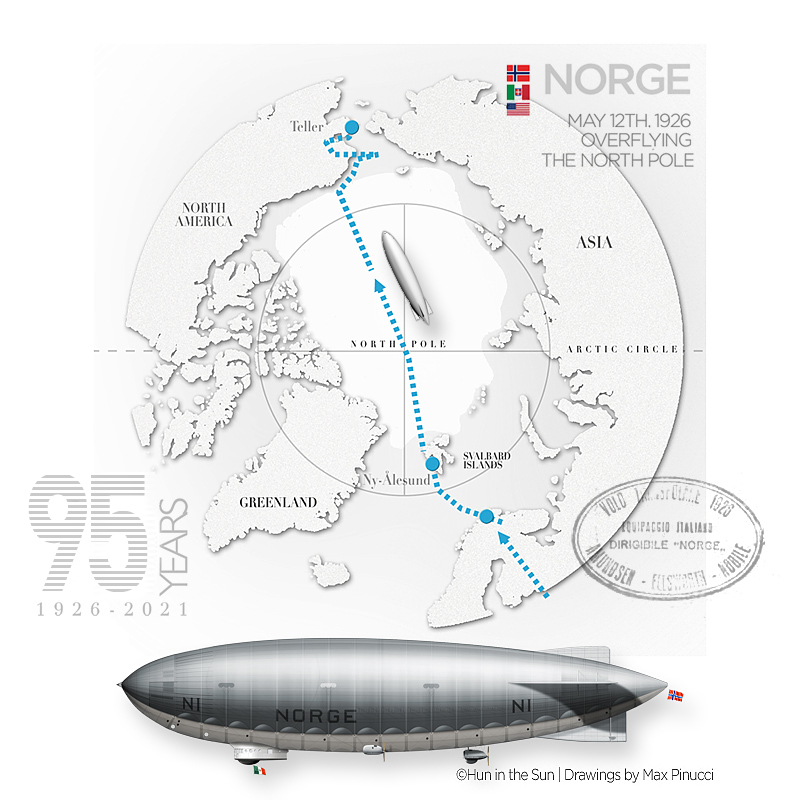 The N-1 Norge anniversary illustration: ©Hun in the Sun | Drawings by Max Pinucci